The LEGO® SERIOUS PLAY® method is far from just playing with a pile of LEGO®! The theoretical underpinnings are solid and grounded in behavioral and relational science as well as systems theory and theories of knowledge.

WHAT IS LEGO® SERIOUS PLAY®?

The dynamic LEGO® models used in LEGO® SERIOUS PLAY® capture and convey remarkable amounts of knowledge compared to more standardized and one-dimensional methods. This enables you to create social constructive knowledge systems that empower you and the people around you to become more successful – right now.

The aim of LSP is to create imaginative and effective ways to develop innovative strategies, build strong teams and to deal with difficult challenges. By “thinking with your hands” and through serious play with LEGO® bricks, you cultivate your creativity and innovative capabilities.

Today, LEGO® SERIOUS PLAY® is the only community-based business model using LEGO® materials that is officially approved by the LEGO® Group. 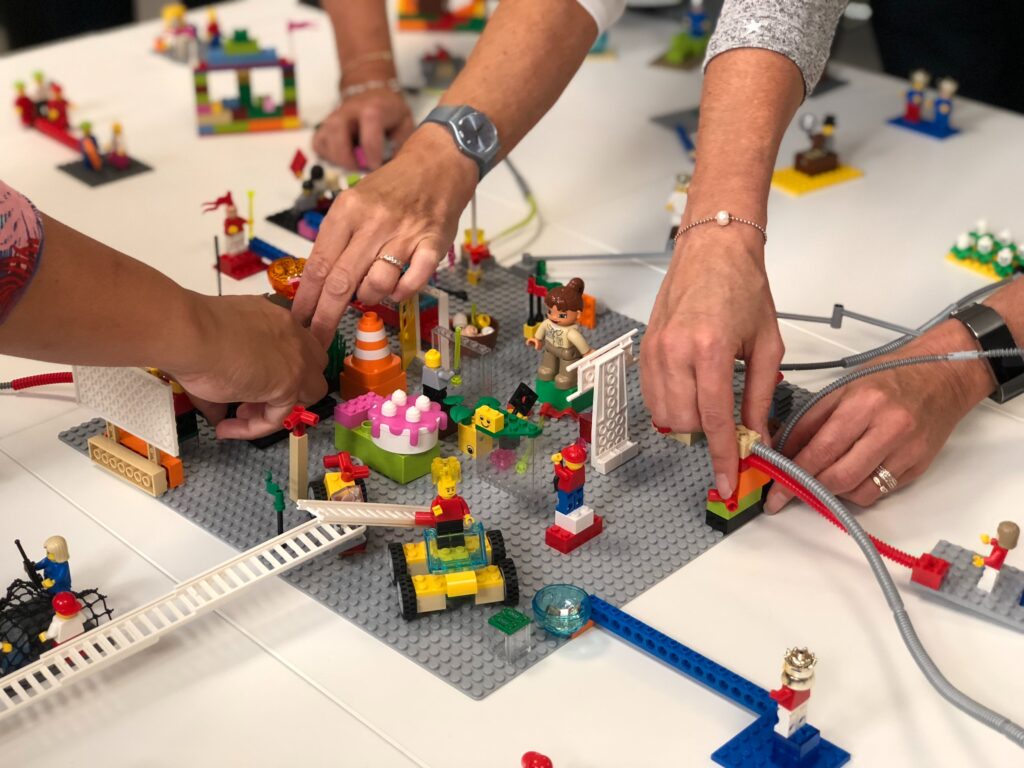 Through three-dimensional LEGO® models, realistic scenarios that visualize challenges and opportunities are created. This provides an entirely new perspective on your organization and the world around it.

Complexity is reduced and valuable knowledge is shared. LSP makes it easier and more constructive to handle the challenges that organizations and companies are faced with, as the issues are “brought to the table” via LEGO® models, and thereby made more concrete, constructive and easier to work with.

The theoretical framework behind the LEGO® SERIOUS PLAY® method

The LEGO® SERIOUS PLAY® method was developed during the 1990s by professor Johan Roos and professor Bart Victor in their search for more effective ways to meet the increasingly complex and challenging demands of the business world.

The method is theoretically grounded and empirically proven to help people in organizations see their challenges in new ways. Just as it enables people to create new ideas and approaches to their challenges.

The LEGO® SERIOUS PLAY® method is built up around a relatively simple number of elements and rules. If the method is facilitated in a skilfull way, it can be useful to anyone who wants to engage in a more accessible, innovative, creative and effective development process.

Below, we briefly describe the theoretical framework behind some of the main LEGO® SERIOUS PLAY® elements:

What is Serious Play?

You might consider the term “serious play” to be a bit self-contradictory, as play is often considered a frivolous leisure activity that is not suited for real and serious work. However, play is far from only a frivolous activity. Research shows that “play” has several business related benefits. We relax our need for control – becoming more open minded. This gives room for imagination, so we can better imagine new solutions and see ourselves in new situations. Additionally, it improves our capacity to develop relationships. The literature on play concludes that play always serves a purpose, and for that reason, the purpose, the objectives and/or the goals of the organization become the key components when we use LEGO® SERIOUS PLAY® as a development tool.

In 2004, Johan Roos and his colleagues defined serious play as an activity “…that draws on the imagination, integrates cognitive, social and emotional dimensions of experience and intentionally brings the emergent benefits of play to bear on organizational challenges”[1]. LEGO® materials are uniquely beneficial for the practice of serious play, as embodied in the LSP method.

Another dimension of LEGO® SERIOUS PLAY® is its potential to generate peak performance or “flow”. This happens when people become fully involved in an activity: They become energized, focused and enjoy what they are doing. The LEGO® SERIOUS PLAY® method can enable this fantastic experience of flow, which makes it very effective and efficient in work situations.

Storytelling and metaphors are important dimensions of play and of LEGO® SERIOUS PLAY®, because they are integral parts of human experience.

Within organizations, stories play a role when contributing to the production, understanding and transformation of beliefs and values of the organization. For example, most strategies can be seen as stories.

Metaphors make storytelling livelier and more colorful. Metaphors are figurative speech that describe one thing through another to help clarify things and situations. Communication at work are often filled with metaphors, because it enhances shared understanding.

The connection to the fields of psychology and behavioral science

The LEGO® SERIOUS PLAY® method is built upon two complementary learning theories, constructivism and constructionism. According to constructivism (developed by Jean Piaget), we produce knowledge and meaning based on what we experience, and how we actively interact with the world from childhood to adulthood. Constructionism (developed by Seymour Papert) focuses on how individuals learn. It recognizes that when learning something, we benefit from constructing both mental and real models of what we experience. We, therefore, learn more efficiently, when we build with our hands, as it is an effective and efficient way to encourage thinking.

All LEGO® materials leverage these ideas and so does the LEGO® SERIOUS PLAY® method. When playing seriously, people in organizations create abstract ideas in a more concrete, visual, and tangible way.

The word “imagination” has many different cultural and linguistic dimensions. Common to all of them are that people have a rather unique ability to visualize images in their minds. LSP is based on three types of imagination:

Typically used to describe a complex and confusing world “out there.” In business life, it draws on simplifying value chain models, hierarchy/flow diagrams, and various matrices to describe for example attractiveness and profitability. The statement: “this is how it is”, suggests that someone just used their descriptive imagination.

Allows us to see what is not there. It is about seeing new opportunities by recombining, changing or transforming objects and concepts. We use the creative imagination to elaborate possible realities and opportunities, perhaps even to create new realities and facts. “Thinking outside the box” is a term often used to encourage creative imagination.

Is rather challenging and differs significantly from the other types of imagination. It negates, slanders, repeals, contradicts and even destroys the sense of progress that comes from the descriptive and creative imagination. Sarcasm, irony and parody manifest the critical imagination, and in business situations this needs to be handled with great care.

The LSP term “strategic imagination” is a process that emerges from the complex interplay among the three different kinds of imagination.

It is sometimes said of failed organizations that management “fell asleep at the wheel” (metaphor). Another way to express this issue is to say that people within the organization were demotivated or prevented from using their imagination. When management did not see a new competitor, technology or merger coming, it may have been a severe failure of their imagination. The LEGO® SERIOUS PLAY® method is designed to unleash and encourage the full potential of peoples’ imagination to increase the chance for success.

A key success factor for working with the LEGO® SERIOUS PLAY® method is competent process facilitation. If you simply throw a bunch of LEGO® bricks on the table and ask people to engage in the delicate process of serious play, you may risk intimidation.

Facilitators need to create the necessary sense of psychological safety, engagement and group cohesion, which means they need to be skilled.The consultants at Inthrface have facilitated more than 1000 workshops and several hundred development processes using the LSP method, just as we have trained hundreds of new facilitators in the method. Moreover, one of the LEGO® SERIOUS PLAY® method’s founders Johan S. Roos continually coach Inthrface facilitators to ensure their proficiency.

Do you want to become a certified LSP facilitator yourself?

What to do next?

If you would like to try out the LSP method in your own company or organization please contact Micael for further information via email or over the phone: +45 2044 7620. You can also get more information about our LSP workshops here.

You can, furthermore, become a trained facilitator in the LEGO® SERIOUS PLAY® methodology yourself. This enables you to facilitate LSP development processes in your own organization or company. Inthrface run several all-inclusive courses in collaboration with LEGOLAND® resorts around the world every year. You can read more about our facilitator courses here or contact Cecilie directly via email: crp@inthrface.com.